There has been much activity at Miranda recently with chicks hatching at the Black-billed Gull colony on the shell bank, and Pied Oystercatchers beginning to arrive back from the south. There should  also be Wrybill heading back as well. Meanwhile the NZ Shore Plover is still present.  The Shore Plover was part of a release of captive reared birds on Motutapu in 2012, it has been regularly seen on the stilt ponds and in front of the old hide.  Banded rail are regularly seen by the car park gate, or occasionally at the lake by the Centre.

It’s much drier this year so there are no bittern breeding across the road, but the black-billed gull colony was successful this year and there are chicks on the shellbank.  They should be flying mid-January. 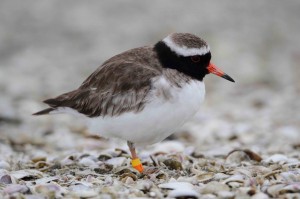