Great ideas migrate, just like birds do! This one started its journey on Ainslie Beach, Southport, Lancashire in the United Kingdom. Six hundred gaily decorated bird models were assembled on the beach as part of an environmental celebration. It was the work of many people of all ages and attracted a great deal of attention. As you can see it was a very colourful and attractive art installation.

The first FLOCK had come into being.

At Pūkorokoro-Miranda Shorebird Centre (PMSC) we thought “Hmmm, this is great, we could give this a kiwi twist and help to promote the cause of shorebirds in NZ.” So we began to create our FLOCK 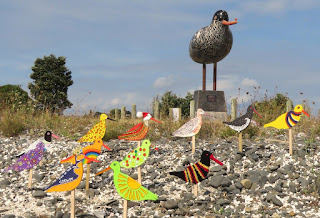 There was a real need. Those migratory birds that leave us to breed in the Arctic have been suffering. Each year fewer birds reach the shores of NZ from their Arctic breeding grounds. To make it even more urgent we had just learned the extent of this population decline. Each year the Bar-tailed Godwit, the NZ Bird of the Year, was losing 2% of its population. For other species, the decline was much worse. The long-term prospects were very worrying.

More people needed to know about this. These amazing birds needed a lot of help. How can you protect and care about something if you don’t know about it?
www.miranda-shorebird.org.nz/theflock

The Flock Project is PMSC’s way of getting the message across in a fun but caring way.We need to keep these birds coming. Come and join us, wherever in NZ or the world you live. Paint or decorate a bird. Each one painted shows that one more person is concerned. 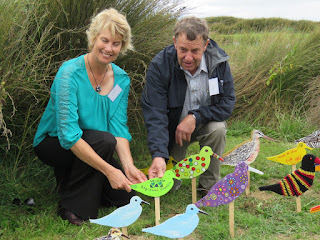 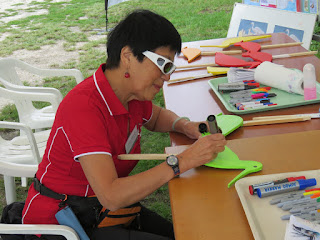 We will be blogging about THE FLOCK for another year. In fact, until they leave our shores for their breeding grounds via the Yellow Sea. Over that year, we want to tell you about these birds, their amazing abilities and the problems that they are facing. We won’t be forgetting our own shorebirds either. 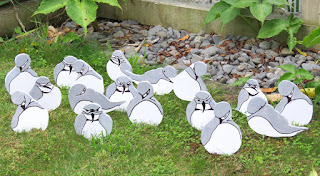 Many of these are facing challenges of a different nature. There are so many interesting stories to tell. We would particularly want to hear from all of you folk out there. Building THE FLOCK is becoming a real adventure. We don’t know where it will end but do know that it will be, in fact, a real success. But we have hardly started.

This is where we were on the 14th of February this year. We had this very small flock but PMSC was convinced that this project was going to work. So we started. 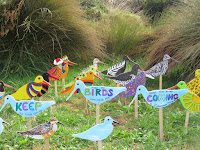 Just over a month later THE FLOCK had grown a bit. Lots of important people turned up. They signed and decorated birds and THE FLOCK grew some more. 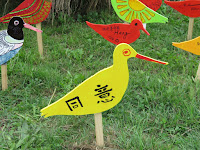 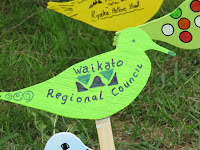 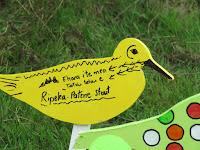 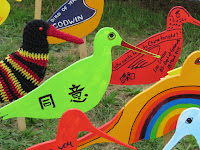 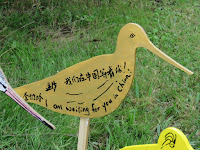 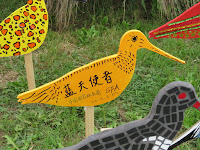 At this moment, there are schools and individuals busy making and decorating birds. Many are around Miranda but there are others in the Bay of Plenty,Devonport and even in Christchurch. It could even be whole new South Island FLOCK! Many people are involved, Children, teachers and grown-ups as well. We want to tell all of their stories.

THE FLOCK is taking wing. Come fly with us. It is going to be quite a journey!