A very happy Christmas from all of the FLOCK folk at Pukorokoro Miranda Shorebird Centre.
We were really thrilled with the Xmas message that we made with some of the FLOCK birds.
However the young people of the Port Waikato Beachcare group were way more inventive. 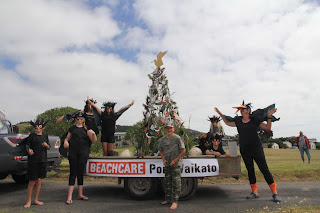 They borrowed some realistic Flock birds to decorate their own unique Xmas tree. Mounted on a float and accompanied by some human oystercatchers it was a prize winner in the Christmas parade. As a group they are deserving of special mention. Under the wing of Karen Opie they have been caring for nesting shorebirds on this part of the West coast. 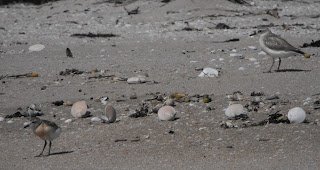 New FLOCKS continue to appear like this one from Pukekohe Hill School. 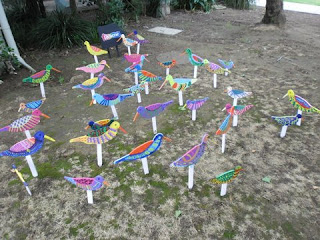 If you are interested in becoming involved it is easy. Just visit www.miranda-shorebird.org.nz/theflock .
There are details of how to make birds and the reasons behind the campaign are told in the “Shorebird Stories”

800km east of mainland New Zealand lie the Chatham Islands. Transporting essentials to the Chathams can be expensive. It was wonderful that Hendrik Schultz found a little space among his research gear for the makings of a very distant wing of FLOCKNZ. Below flockmakers from Pitt Island and TeOne School, Chatham Island. Fellow researcher Rebecca is lending a hand cutting out some extra birds after talking about their brown skua research. 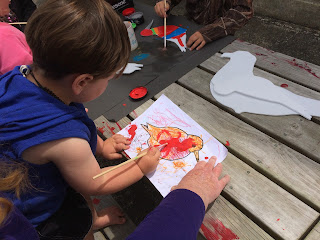 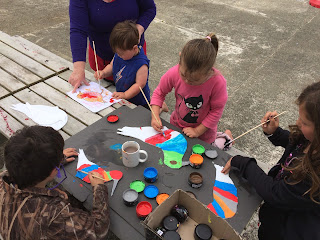 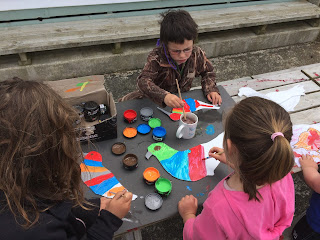 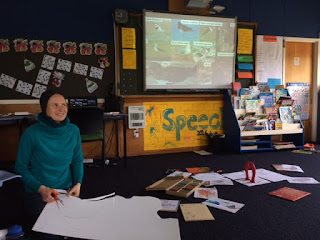 Hendrick has been researching Brown Skua for 3 years so another bird species has been added to the FLOCK. 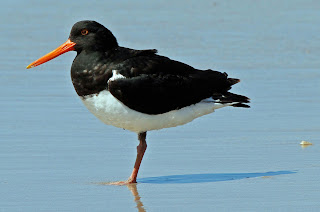 Shorebirds on the Chathams face the same threats as those in the rest of NZ. One very special endemic species, the Chatham Island Oystercatcher, fell to a population of just 50. Sustained conservation efforts have helped build the population up to 300.

We are now nearly 9 months into the FLOCK shorebird conservation initiative. It is a good point in time from which to look back. The involvement throughout NZ has been incredible.It is also thrilling to see the international uptake and participation. This blog site records the country of origin of its visitors and this makes interesting reading. These are the countries listed in order of the number of visits to our blog.

NZ, Russia, USA, France, Australia, UK, S. Korea, Ireland, Singapore and Germany.
Of course there are many more countries involved that aren’t on this list.
Both Australia 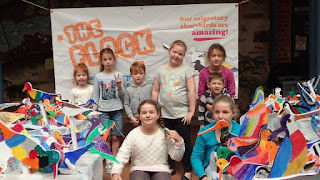 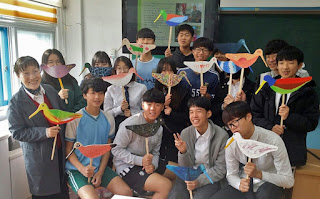 have their own FLOCK. In fact 2 wings in each country. The interest from Russia has been very recent and we would love to hear what’s happening up there at the other end of our flyway. Here we are heading into Summer and there they are approaching the shortest day of the year.

We all share the migratory shorebirds. A world without these magnificent creatures is hard to imagine. It is wonderful that so many people do care and want to “keep the birds coming”.