Conservation Week has seen lots of FLOCK activity throughout the country. 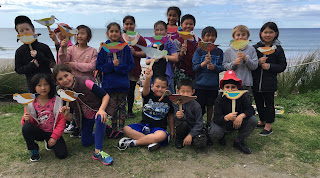 On 6th September, World Shorebird Day, years 3 and 4 from Te Puke Primary School had a great day at Newdick’s Beach. They went with Karen to plant their 76 birds and newly made signs.

Tania Bramley from Maketu Wetland Society was along to help them with identifying the birds. Carolyn from MOW also told them about predator control. It must have been a tiring day as they also helped Chris of Coast Care with some dune planting. Well done Te Puke Primary!

The BRaid Rivers Group had a great FLOCK Launch on 9th September with Rangiora Borough School bringing along their FLOCK. 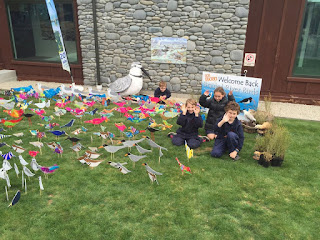 The party was hosted by Rangiora DOC. Sarah Ensor brought along their giant wrybill to join the party. It was an important event and Waimakariri District Mayor, David Ayers, joined in the fun. Good work Rangiora Borough School.

There have been happenings in the bay of Plenty. Birds of Plenty promote a great variety of bird related activities annually. Meg and Mike Collins of Ohiwa have been busy getting their “Flock A Plenty” organised. Five schools are involved so far, so there will be plenty of birds for their FLOCK launch on 2nd October. 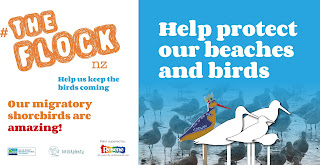 Already their beautiful sign has been erected at the beach. 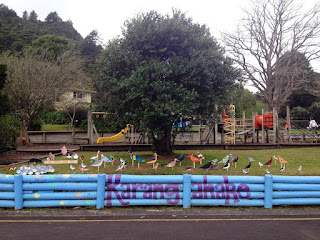 A little closer to home Karangahake School, near Thames, had their own FLOCK day. Krystal Glen, the Pukorokoro Miranda Shorebird educator, was pleased to be invited to talk about the birds and add some of her FLOCK to the display. Super birds Karangahake School.

There is just a little space to tell you about a threatened shorebird that is quite common in the Bay of Plenty over the summer. 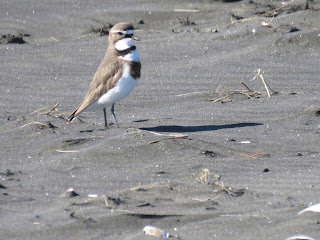 It is the banded dotterel. Most, but not all, of them breed in the South Island and come north for the winter. Some also go to Australia for the winter but they never breed there.

Some of them have just joined THE FLOCK
BREAKING NEWS from BRaid: 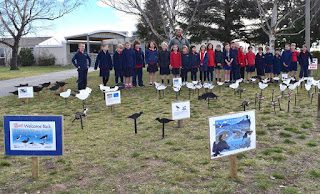 Twizel Area School has just launched it’s own FLOCK. Well done to you.

Also a strange happening, their big FLOCK has split in two. One half landed outside the Waimakariri District Council building just a few hours ago.

and the other suddenly appeared outside the Rangiora Vet Centre. Are these Flash Flocks? Where will they appear next? 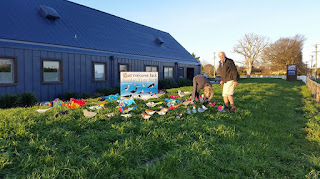 Keep up to date with these exciting happenings www.facebook.com/search/top/?q=braided river aid

The next few days are going to be very exciting. If you have something going on with your own FLOCK please let us know and we can share it with everyone.